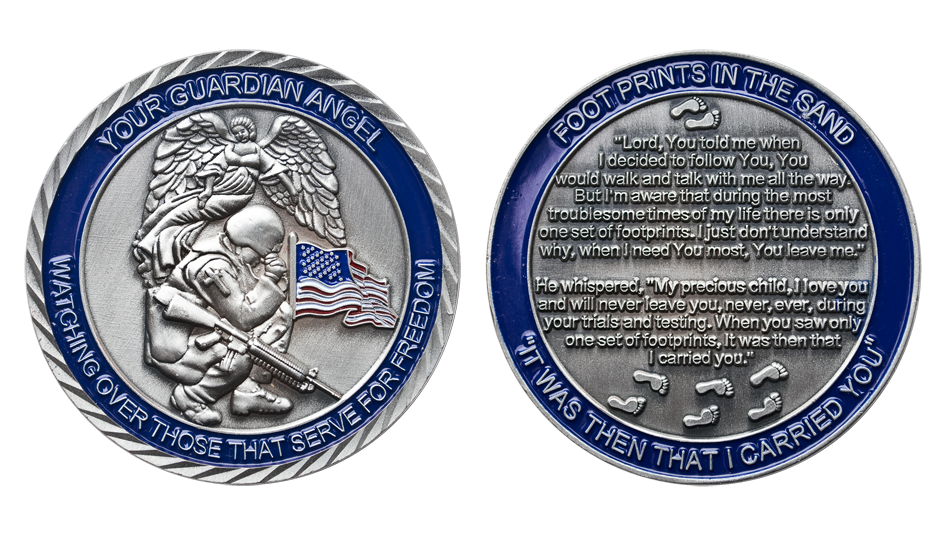 A brief overview of commemorative coins and medals

When you think of a coin, you’ll most likely think of one in current circulation. Or one rubbing a hole in your pocket. A rounded piece of alloy metals representing a certain sum of money, supposedly manufactured to simplify paying for your coffee. With the idea of removing the need to drag gold bullion or large stones around — the latter being the case on some Pacific islands. I say “supposedly” because coins as legal tender are proving to be more cumbersome than convenient. This is because they cost more to manufacture and transport than they will ever be worth. Custom commemorative coins have an additional emotional value.

But a coin’s worth is more than its face value. I am talking about what it symbolises. And this is the origin of the challenge coin. Challenge coins are awarded to people for going above and beyond the call of duty, a tradition stretching back over two millennia. And along the way they have provided the material for some entertaining anecdotes.

The history of challenge coins

The earliest example of challenge coins date back to the Roman empire. Soldiers were awarded them as a monetary reward for military achievements, and the coins often bore a portrait of the recipient. Some accounts say this encouraged the men to retain their coins as a souvenir, rather than spend them on wine and women. The tradition of commemorative coins bearing a picture of the recipient continued until the Renaissance, when they were mainly given to the monarchy to mark monumental events in their lives and featured a portrait of the royal in question. However, it took the First World War to really define the challenge coin, and to deliver the most popular legend associated with it. A wealthy American lieutenant, so the story goes, had medallions

minted for all the members of his unit. When, shortly after, one of the squadron’s pilots was shot down and captured behind enemy lines, he managed to escape, disguised as a German. He made his way to a French outpost, but the villagers thought he was a spy. Then the pilot remembered his squadron’s coin. One of the villagers recognised the symbols, and he was spared execution. They even gave him a bottle of wine in compensation.

Another version is that the tradition began in an infantry-run bar in Vietnam, where customers were required to present their challenge coin to gain entrance. This was a distinct improvement over the previous means of ID — a live bullet. Many of these bullets had been distributed as a reward for surviving a mission, the idea being that it was now a “last resort,” to be used on yourself rather than surrendering to the enemy. Unfortunately, this show of status soon escalated from a handgun bullet to artillery shells as the soldiers tried to outdo each other.

Either story is good enough to serve as the origin for a kind of military game. The rules are simple enough: Service members rap their challenge coins on the bar, shouting “Coin check!” and anyone who cannot, or is the last to produce one has to buy a round of drinks.

In any case, this has taught soldiers to keep their coins on them at all times.

Challenge coin traditions have since reached the highest ranks. In 2011, former defence secretary Robert M. Gates toured military bases in Afghanistan, shaking hands with dozens of US troops in what, to the untrained eye, seemed like a simple exchange of respect. In fact, it was a secret handshake with a surprise for each recipient — a duplicate of his challenge coin.

Starting with Bill Clinton, who has his own collection from his military days, every US president now has a distinctly designed coin to present to foreign dignitaries and military personnel. George W. Bush often gave them to injured troops returning from the Middle East, while Barack Obama notably handed them to service members stationed at the foot of the steps to Air Force One.

Nowadays, challenge coins have moved from beyond the military and government officials to other offices: Secretaries of transportation and agriculture have created their own coins, as have senators, law enforcement agencies, and first responders. Custom coins are commissioned by industries, corporations, and civilian groups across the board. From college graduations to work anniversaries, these coins are minted to honour all sorts of achievements.

Whether a fledgling start-up, an established small business, or a Fortune 100 multinational, commemorative custom coins make for an ideal reminder of the values and heritage of an enterprise — for employees and clients alike. Companies also use these coins to represent milestones in their businesses. They are using them to build team spirit, link people with similar interests, and even to promote their corporate brand or logo. When distributed at conferences, sales events, and trade shows, a custom coin certainly makes more of an impact than a business card.

But it is not only big business that hands out such coins. Many not-for-profit cultural and social organisations, such as museums, make use of custom coins to commemorate significant events and activities and so preserve the heritage of the organisation for years to come.

One final modern-day use of these coins is in the world of movies. Alongside featuring as historically based coinage on the screen, custom coins are a favourite among film producers off the set, too. For example, the executive producer of The Big Bang Theory gave challenge coins to the Space Shuttle crew, while the Breaking Bad team received theirs after wrapping the series.

Apart from when used as props, custom minted coins bear no currency or value, and are not legal tender. Their worth is entirely symbolic and may only have a significance for the recipient. I, for one, still own the medal I was awarded for writing at college — a seemingly insubstantial act, but one that spurred me on to attend journalism school.

And if the history of custom coins — ancient and modern — teaches us anything, it is the meaning of admiration for a special achievement. Giving a coin as a reward for excellent performance builds pride and morale. While receiving one is a great honour and often encourages team members to strive to earn one.

During times of tragedy and loss, government agencies, politicians, and even local civilian communities can show their gratitude and admiration by honouring first responders with custom coins.

They build a strong bond between those who receive them and those who award them. Moreover, the coins create a sense of unity among their owners that will last a lifetime.

Ready to take the challenge?

Custom commemorative coins make exceptional gifts that are memorable and unique. Whether you want to honour a service member, a first responder or a valuable team member, challenge coins make the moment special.

And if you are ever the fortunate recipient of such a coin, do keep good hold of it — not like poor Sergeant Ness (pictured) who dropped hers after President Obama placed it in her hand.

If you are considering a challenge coin for your business, organisation, or event, please request your free sample and quote here.